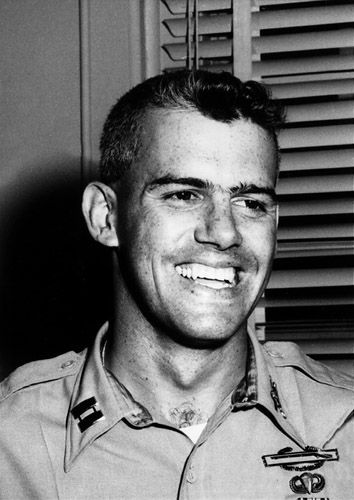 Captain Humbert Roque "Rocky" Versace (July 2, 1937 – September 26, 1965) was a United States Army officer of Puerto Rican-Italian descent who was posthumously awarded the United States' highest military decoration—the Medal of Honor—for his heroic actions while a prisoner of war (POW) during the Vietnam War. He was the first member of the U.S. Army to be awarded the Medal of Honor for actions performed in Southeast Asia while in captivity.

Medal of Honor Citation: For conspicuous gallantry and intrepidity at the risk of his life above and beyond the call of duty while a prisoner of war during the period of October 29, 1963 to September 26, 1965 in the Republic of Vietnam. While accompanying a Civilian Irregular Defense Group patrol engaged in combat operations in Thoi Binh District, An Xuyen Province, Republic of Vietnam on October 29, 1963, Captain Versace and the CIDG assault force were caught in an ambush from intense mortar, automatic weapons, and small arms fire from elements of a reinforced enemy Main Force battalion. As the battle raged, Captain Versace fought valiantly and encouraged his CIDG patrol to return fire against overwhelming enemy forces. He provided covering fire from an exposed position to enable friendly forces to withdraw from the killing zone when it was apparent that their position would be overrun, and was severely wounded in the knee and back from automatic weapons fire and shrapnel. He stubbornly resisted capture with the last full measure of his strength and ammunition. Taken prisoner by the Viet Cong, he demonstrated exceptional leadership and resolute adherence to the tenets of the Code of Conduct from the time he entered into a prisoner of war status. Captain Versace assumed command of his fellow American prisoners, and despite being kept locked in irons in an isolation box, raised their morale by singing messages to popular songs of the day, and leaving inspiring messages at the latrine. Within three weeks of captivity, and despite the severity of his untreated wounds, he attempted the first of four escape attempts by dragging himself on his hands and knees out of the camp through dense swamp and forbidding vegetation to freedom. Crawling at a very slow pace due to his weakened condition, the guards quickly discovered him outside the camp and recaptured him. Captain Versace scorned the enemy's exhaustive interrogation and indoctrination efforts, and inspired his fellow prisoners to resist to the best of their ability. When he used his Vietnamese language skills to protest improper treatment of the American prisoners by the guards, he was put into leg irons and gagged to keep his protestations out of earshot of the other American prisoners in the camp. The last time that any of his fellow prisoners heard from him, Captain Versace was singing God Bless America at the top of his voice from his isolation box. Unable to break his indomitable will, his faith in God, and his trust in the United States of America and his fellow prisoners, Captain Versace was executed by the Viet Cong on September 26, 1965. Captain Versace's extraordinary heroism, self-sacrifice, and personal bravery involving conspicuous risk of life above and beyond the call of duty were in keeping with the highest traditions of the United States Army, and reflect great credit to himself and the U.S. Armed Forces.