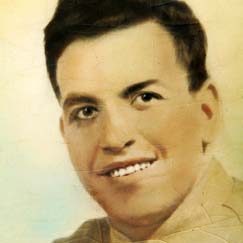 Medal of Honor Citation: Valorous actions in Aprilia, Italy, May 27–28, 1944. During the fight, May 27, he aggressively led his rifle squad in neutralizing multiple enemy strong points and inflicting large numbers of casualties on the enemy. The next morning, as his company resumed the attack, Lara sustained a severe leg wound, but did not stop to receive first aid. Lara continued his exemplary performance until he captured his objective.